This work emerges from the revisiting of the early cinematic portrayal of characters of Chinese descent, and the exploration of popular computer-generated imagery, which is applied and seen in many platforms, from the relatively intimate mobile applications on your fingertips to the massive productions in film, commercial, and video game industries.

The video on the left consists of still images extracted from eleven Hollywood movies and American TV series produced from the late 1930's to the late 1980's, in which they centered around the portrayals of people of Chinese descent and the stories associated with Hong Kong. I use a mobile application that has synthetic media technology, mostly known as "Deepfake", to convert the characters from the still images and rewrite their lines.

The video next to it shows a character that I perform, named the "Pre-CGI body”. This body is referring to those performers who are dressed in a tight suit which has a lot of motion tracking data points attached. They are widely seen in pre-productions of commercials and movies in which their performances and bodies are used as the “material” for post-production where computer graphics or 3D animations are generated on top of their actions, faces, or bodies. Despite that, this “Pre-CGI body” I perform in the video is attached with fake tracking data points which do not function as it suggests. This video is filmed after the one on the left is made. The body is re-enacting what has been created on the screen on the left, and they is not altering the characters on the other screen as it might appear to be from the setting.

This work suggests a continuous paradox and an intertwined dilemma which often takes place in the constitutions of representation, and raises the question of ‘Who actually has the legitimate power of control on the bodies?’
_____________

In the installation, the prints stretching from the wall to the floor, mounted in between the two videos, are filled with digital data which are generated from three-dimensional scanning of my body through a mobile application.
Use the arrows to scroll through the images. 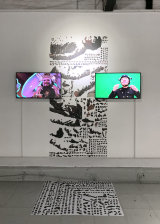 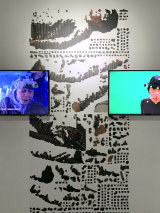 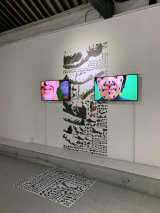 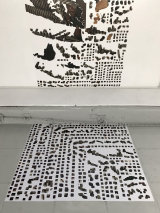 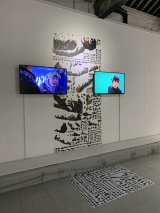